I had the chance to fish the Wye with Paul Jenkins this weekend and I was really looking forward it, Paul picked me up bright and early and off we set.

The weather was not looking good at the start of the trip with it raining and we were both hoping that it would pass over so we could have a great day looking for the ladies on the upper Wye without getting wet and miserable. The wind was down and conditions were looking great as we drove alongside the river checking out the runs and pools up high in the Wye valley. The water was as clear as glass and the level was perfect and after having a good look around we decided to pull in alongside a lovely looking run  and a pool above that. After chatting and deciding on taking one rod each and going fish for fish, I set up  the french leader on my 10ft 3wt and Paul set up the klink and dink on his 9ft 4wt. As we got to the river’s edge Paul  gave me the honors to fish first. For the clear water and level, I decided to use a 2m on the point and a 1,5 on the dropper, the distance between the flies were around 20″ or so. The run looked perfect for where I stepped in. There was a bush that stuck out in the river and it seemed to have a little drop off beside it. I pitched the nymphs below working my way up to the likely looking spot for a grayling on the drop off. I had a fast take but missed and then as I got to the drop off I pitched the nymphs way past it and tracked the indicator as it come down river. The indicator slipped away up river and I was into the first grayling of the day. Result.

After releasing the grayling Paul stepped in with the klink and dink and worked his way up the river and in no time he was into a lovely out of season trout. Lovely colours and in perfect condition and in seconds the fish was returned without any harm done. We both worked our way up some lovely pools and runs without catching even a trout. The water screamed fish but seemed to be void of anything. We moved on trying hard to get in contact with a grayling but with the odd trout falling to the nymph we decided to move back down river a few miles and leave the trout alone. Paul took me to a few places that he has had good success with over the past years with the grayling. It’s always a learning curve fishing with Paul with his vast knowledge of tactics and approach to the river, I truly believe this man could pull a fish out of a puddle if he wanted to 🙂  We made our way down river stepping in and fishing a few runs on the way that looked good and managing a few grayling to hand. It seemed that I was destined to catch the smaller grayling of the day but I was happy to catch anything so it didn’t bother me one bit. I already had a fair grayling at the start of the day and I was happy with that and anything after it was a bonus.

Below Paul is into a fine grayling using the klink and dink method, the grayling was taken on the nymph at the back-end of the pool. The grayling to hand is in the photo below this one. 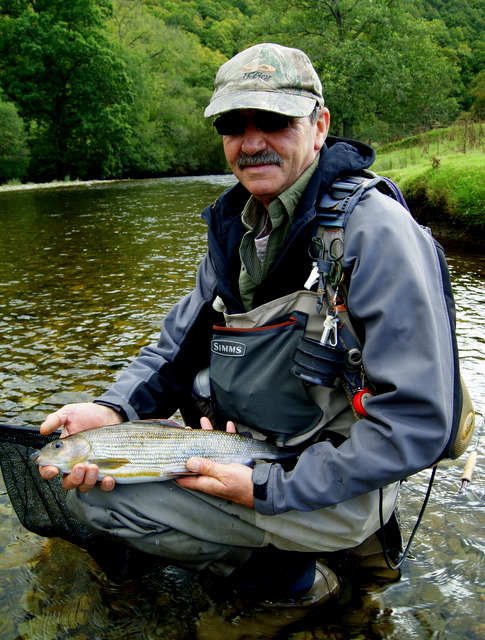 The day was going really well with a good number of grayling to hand and the odd trout. As the day went on the fishing just got better and better, Grayling started to rise and in no time we were into the fish using a small stone fly pattern. Bushy being Bushy showed the way forward casting in the tight vegetation and flicking the fly under the over hanging limes that were touching the water surface and picking off the most difficult fish feeding. After taking a few more grayling the day was getting late and the fishing started to slow as usual. The temp started to drop so we decided to make a move on up river back to the car but before we left we gave one last run a few more casts and i’m glad we did. After a short time, I was hooked into another grayling on the nymph and then another on the dry. Paul stepped in behind me and in seconds was into another fine size grayling. It seemed that it was a good choice to fish the run before we set off home. A few more grayling fell to our flies and the decision was made to make a move home. It was a great days fishing on the Wye with paul and not a dull moment to say the least. Fishing was great, the company even more and if all goes to plan, I will be fishing the same area this weekend with another good mate. I really can’t wait!!

Ill leave you with a load of photos of are great days fishing. 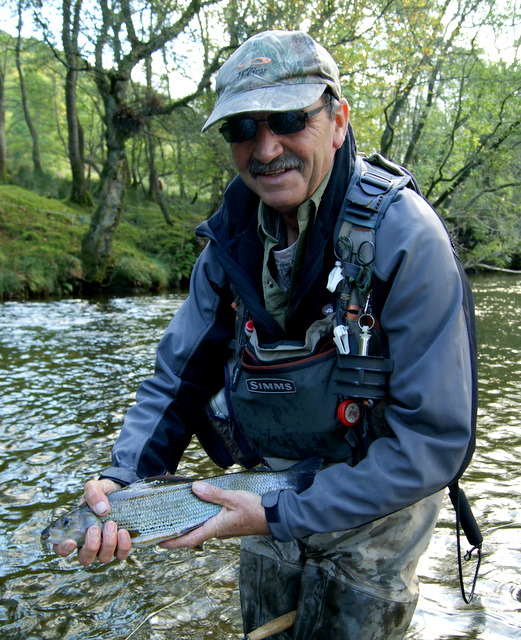 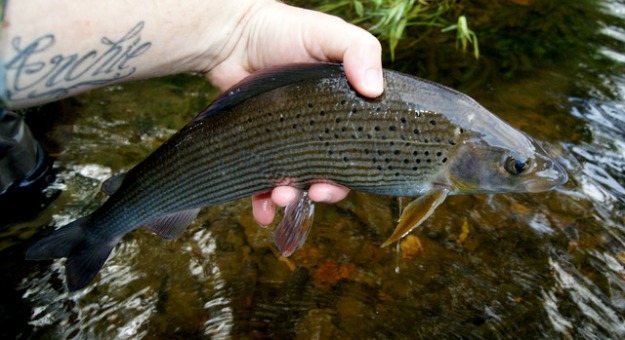