Im so glad that the weather made  improvement from raining hard most of the weekend and giving me the chance to wet a fly before I had to back to work on Monday.

Waking up this morning and seeing the weather had broken I was  relieved to say the least. It felt like the rain was never going to stop and i was thinking no fishing this weekend for me..  After a quick coffee and  putting the gear on i was on my way to the Rhondda around 7 am. Before i entered the Rhondda i give the Taff a quick look to see how the old girl was running. She was still pushing a fair bit of flood water and a fair bit of colour also. Unfishable really. The Rhondda was in much better shape but still running with a good force but clear. I know after a good flood and dropping water it can be unbelievable fishing on times. As usual i had my both rods with me, My greys 10ft 3wt and the greys 8ft 4wt. Im known as two rod Terry around these parts:) I feel naked with only one so even if i don’t use its always with me. French leader set on the 10ft and the dry on the other.  With so much water i put a 3.5m gold head hairs ear on the point and on the dropper a 2.8m P.TN vereant 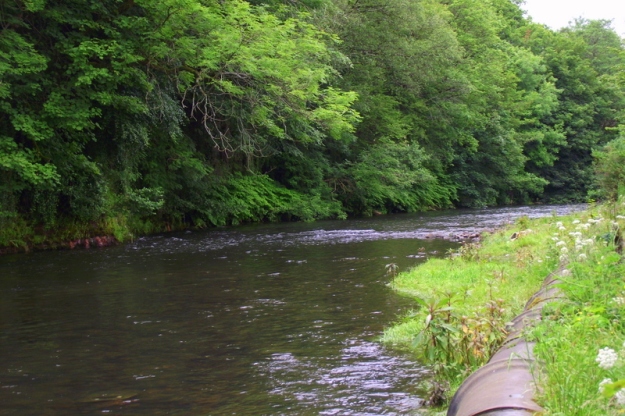 Starting off with the french leader i picked my way up river very gingerly fishing all the slack water i could find and placing my feet as careful as i could, i didn’t want a wetting and didn’t fancy taking a swim either.  I come to a very fast deep run and made my way across the river so i could fish the slack part behind a few submerged boulders where if i was a trout ide be hiding. I set my video cam on and thought ide show you  a few videos using the french leader with good success.

After making these short videos i made my way up river a little further to the slower water hoping that there might be a fish or two on the fin, at this time there were a few B.W.O on the water so i was betting there was. But before i got to the slower waters i see a lovely rise on the far side of a fast run, just beside a huge rock.  I had a size 14 olive pattern on well  hackled for the fast water so you can pick it out easily. Getting myself into a good position i mad a few  casts to judge the distance and flow. Atter getting it right after a few casts,well more than a few cast i managed to fool him.  Here he is below

Well the way it was going i thought it just couldnt get better. (WELL THATS WHAT I THOUGHT) Trout started to rise in good numbers all down to the better hatch of olives on the water and i was steadily making good numbers. This is why i like to use two rods because you can change over with no bother at all. As i was making my way just watching the bank for the really slow and small rises, hoping for a better size trout to be feeding i seen a small little splash under a tree branch just touching the water, well not a splash it was more like a little jet of water, nothing really i just thought minnows, but something just told me to check it out.  I made my way to a spot over looking the water and to my SURPRISE!!! i seen this large trout just mopping up the olives just under an over hanging bush. I got the camera out and shot this video 🙂 I was just  fascinated watching him taking the flies. I think im really lucky to see this and catch this on camera on are river.

The adrenaline started to pump and i knew that i had to go into stalker mode as i call it:). To get to the spot where he was feeding i had to walk about 100 yards back up river and make my ways down to where he was feeding.. As i as walking back down i was wishing he was still there and still feeding. As i got closer i could see him just coming up under the bush. I moved down past him trying not to make much noise in the water and not to send any ripples across the water.  I greased the fly up and put mud on the tippet and dipped both in the water before casting. I knew that i had one chance and one chance only. I made the cast and the fly just drifted bang on-line where he was feeding and the drift was perfect but he didn’t even move. So i sat back and watched for a few moment and i seen that he was started to take one out of every few olives that pasts. He rose and i left it for a moment and i made the cast. It all kind of went in slow motion and he just sucked it in and i made the strike . He just sat there for a second and then he started to shake his head and straight away he was fully out of the water tail waking down river. There was no way i was going to stop him so off i went. After a wild few runs and jumps i managed to get him to hand. Cracking fish and im still smiling writing this 🙂 after a few quick photos i slipped him back to fight anther day. Here he is

What more can i say after catching this fine trout. After releasing him i just sat there just taking everything in and after that i headed off home with a hell of a smile on my face just thinking it just don’t get better than that…