Well it happened once again with the rain coming in and making the main rivers unfishable and deadly again.

With the rivers being out I knew that the streams would be the best bet and most often or not they are totally fishable even when the rivers are way up. My good mate Lewy fancied a change from the bigger rivers and sewin fishing so this was a good opportunity to do so, so the stream it was. 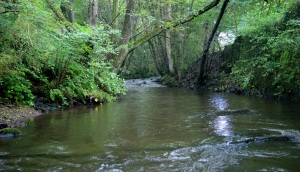 We set off around 12 taking it easy just thinking we would just have a few hours out and be home early to keep the wives happy 😉 The stream was not untouched by the heavy rains and she was pushing and coloured but it can fish quite well in these condition and from past experiences I knew that it would clear later on in the day. Dry fly was not an option so it was nymphing till the river cleared, I was looking out for fish on the fin but it was just pushing too much and too coloured. There was an abundance of stone flies hanging in the air and a few olives but it made no difference what was hatching in the conditions.

Sion fishing a fine pool below.

Sion took a few out of this pool and after the takes dried up he worked his way around the pocket water above doing the same by taking fish from every little crease and pocket There was no signs of the river clearing at this point and with a few odd showers we didn’t expect it to really.

As we moved around the stream, we both took turns fishing spots and going fish for fish, many fish were caught and every one of them were beautiful little gems. I took a lot of photos throughout the few hours we were out and usually i’m the one behind the camera but Lewy took over for some time catching a few shots of me holding a few little gems

I’ll leave you with a few photos of the day below.